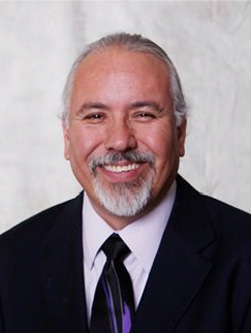 Dr. Gonzales is an Associate Professor of Family and Community Medicine at the University of Arizona College of Medicine-Tucson (UA COM-T). He is also the Assistant Dean for Curricular Affairs and serves as an Adviser on Traditional Indian and Western Medicine Collaboration to the College of Medicine.  In his role as Assistant Dean, Dr. Gonzales administers the College’s Rural Health Professions Program (RHPP) and the medical student volunteer services program, Commitment to Underserved People (CUP).

Dr. Gonzales is a Societies Mentor for both PMAP, the College’s post-baccalaureate program, and the College of Medicine students. Societies are the Learning Community program of the UA COM-T. Mentors teach the students history taking, physical examination skills and professionalism.

Dr. Gonzales previously served as Medical Director at the El Rio Community Health Center and spent 13 years as a rural family doc. His service area was 1600 square miles along the USA-Mexico border in Patagonia, Arizona. During that time, Dr. Gonzales was a member of the United States-Mexico Border Health Commission.

Dr. Gonzales served on the American Academy of Family Physicians (AAFP) Board of Directors from 2012 to 2015. While a member of the AAFP Board, he served on the TransforMed Board of Managers. Dr. Gonzales was the senior Arizona Delegate to the AAFP Congress of Delegates for 12 years, and served on the Commission on Public Health, Task Force on Universal Health Coverage, Committees on Rural Health, Special Constituencies, and Minority Health. He has served in various leadership capacities within the Arizona Academy of Family Physicians, including Past-President and Speaker for 4 years. In 1997, he was named Arizona Family Physician of the Year.

Dr. Gonzales, who is of Pascua Yaqui Indian and Mexican descent, grew up on Tucson's southside, and is one of the first high school graduates in his family. He is a sixth generation Tucsonan. Dr. Gonzales resides in Nogales, Arizona. He and his wife, Debbie, have four children and are fortunate to have 9 grandchildren.

Dr. Gonzales participates in the Easter Ceremonial Dances at the New Pascua Yaqui Pueblo in Tucson annually during Lent. He is a sweatlodge leader in the Yaqui-Inipi Way Sweatlodge Ceremonies. One of his most rewarding experiences is to have students, medical students, residents, faculty, and patients participate in this ceremony.

During his free time, Dr. Gonzales enjoys spending time with Debbie, his children and watching the grandkids grow up. He is an avid reader of history, particularly Native American. As two of his sons were combat Marines during the Afghanistan war, he has developed an interest in Marine Corps history.

Dr. Gonzales serves the ABFM on the Certification Committee, the Knowledge Assessment Committee, and the Engagement & Communications Committee.